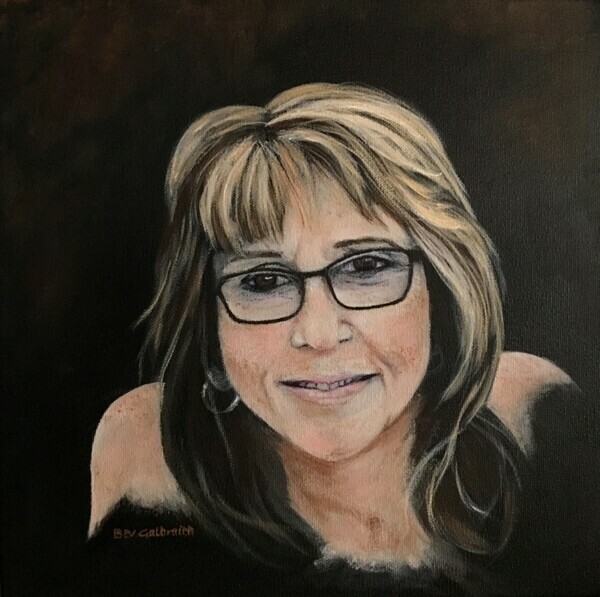 I was born in Whitemouth, where I attended school and spent most of my spare time drawing. As a teenager I went to the Gimli Arts Camp put on by Culture and Heritage in the summers and the monthly sessions over the winters. There my drawings became more dimensional and I gained a love of painting. I took leadership training so that I could teach the summer art camps in Whitemouth. After High school I attended Red River Community College and took Advertising Art. At the same time I took evening life drawing classes at the Forum Art Institute.

After College I worked at Sanford Evans Publishing in the Art Department. I married and while raising two children, I freelanced for three promotional companies in Winnipeg.

We moved to Stonewall in 1998 and I became a member of the Arts Council and the Stonewall Art Group. I have helped host four Interlake Juried Art Shows and chaired The South of the Lakes Art Tour for 15 years. I worked in the Interlake School Division with the Arts Enrichment Program bringing art to the students at lunch breaks, their artist in residence program, and the semi annual children's art shows. I taught at the Summer Arts Camps, also run by the Prairie Oak Regional Arts Council. I have painted at the Forks and at the Red River Ex , through Interlake Tourism, and have had numerous shows. My works are owned from Alberta to Nova Scotia and I have won a few awards.

Now since moving to St Clements, I have been teaching children and Adults to paint at the Gwen Fox Gallery. I also have done many paint nights, Including two for the city of Selkirk. And in October I will be at the MB Art Expo in Winnipeg again . I paint in Acrylics and after 40 years of trial and error, I believe that I have gained a certain knowledge of them.

Creativity is a real, natural high and sharing it brings back many rewards!

Click on the image to enlarge
Copyright © 2020, The Selkirk Community Arts Centre. All rights reserved. | Administration | Powered by ArtSites.ca