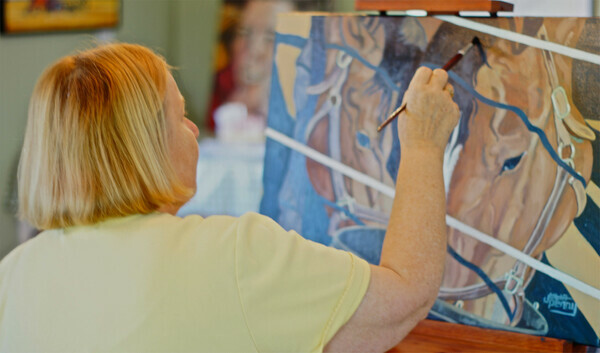 “Scratch a graphic designer and you’ll find an artist underneath!”

Julia Penny has learned the best principles of design and illustration as a graphic designer and a few years later shed her career to explore her artistic talent in a more focused way to become the artist she is today.

Her passion for portraiture has resulted in numerous commissions, which are her focus. Her portraits of Roy Romanow, former Premier of Saskatchewan, and Pat Fiacco, former Mayor of Regina, Saskatchewan, were highly acclaimed. Continually learning, she took numerous painting and drawing workshops culminating in studies at The Heatherley School of Fine Art in London, United Kingdom which specializes in portraiture and the human figure.

She finds her artistic inspiration living in the Interlake area of Manitoba, Canada. Her nomadic life has led her from the United Kingdom to East Africa then Ontario and now the Prairies of Canada. She was meant to be a flatlander, it just took her a while to find her way there! There is a solitude and a spaciousness that ‘speak’ in her work.

As an artist living in rural Manitoba, Julia is part of the Interlake WAVE Artists’ Studio Tour nearly every year. During the Tour, her studio is open to visitors who wish to see her working studio, art for sale and work in progress. Her studio is open all year by appointment.

Julia’s art is in many private collections in the UK, USA and Canada. Manitoba Hydro’s Head Office in Winnipeg, Manitoba, Canada displays several of her paintings in the corporate collection. And she happily accepts commissions. Just email her at artistjulia.penny@gmail.com or visit her website www.juliapenny.com or better yet visit her studio!